Sangla is a perfect getaway from the madding crowd of city life and is one of the most charming valleys in the whole Kinnaur District of Indian state of Himachal Pradesh. Kinnaur lies on the eastern side of Himachal Pradesh. Sunset view at the backdrop of Kinnaur and Kailash from Sangla is magnificent. Perched on the valleys to the right bank of Baspa River and nestled at an altitude of about 8530 ft (2600 meter) above sea level. River Baspa originated from Ni-Lapse of Tibet. Sangla is also known as Baspa Valley. The word Sangla means ‘Lightened Mountains’. Blessed with numerous apple orchards, apricots, walnuts, cedar trees, pine trees, deodar trees and fir trees along with glacial streams and wide valleys, Sangla is a paradise for nature lovers. Sangla is often called the land of ‘Golden Apples’ as it produce yellow and golden coloured apples during the month of August – September and during the month of April – May the valleys of Sangla get bloom with red coloured apples. Both these types of apples are known worldwide and are also exported to the foreign markets. Tourists need to spend at least two nights to visit the local watchable around Sangla. During the past permits were required for tourists to enter Sangla Valley. But presently the scenario has changed a lot. Sangla is surrounded by snow capped mountain peaks of Kinnaur and Kailash with long and wide undulating valleys and guarded by Pine, Fir and Deodar trees. Due to the climatic conditions Sangla also produce Grapes, Oranges and Peach trees other than apples. Sangla was once the capital of Bushahr Kingdom, which was shifted to Sarahan in the later days. Sangla was once hosted by the ‘Discovery Channel’ in their program ‘India’s Deadliest Roads’. Being close to Tibet border, tourists get too see a touch of Indo – Tibetan culture all over the valleys of Sangla, all the houses were built in Tibetan architectural style. These houses were made of Slate stones and decocted with wooden carvings. Sangla is the common habitat of numerous fauna of higher Himalayas to name but a few are Golden Jackal, Griffen Vulture, and Himalayan Rose Finch along with wide varieties of floras. During the month of September Sangla hosts a three days festival of flowers known as ‘Fularich Festival’. In this festival the locals of Sangla showcases rare species of flowers those grows on the upper Himalayan range. The Forest Bungalow of Sangla valley located on the banks of River Baspa is also worth visiting. During winter the valleys of Sangla gets covered with thick layers of snow. From Sangla by walking tourists can visit Barsheri Village located on the banks of Baspa River. From Sangla on a full day trek tourists can visit Kanda on the way to Rupin valley. For adventure lovers can visit Kanda Valley located around 6 km from Sangla. The trekking route to Kanda Valley is through the dense greenery of long Deodar trees. The valley is full of apple and peach orchards.

Kamru Village and Fort — Kamru was the ancient capital of the Bushahr principality. It is especially known for the tower-like fort. From Sangla around 2 km is the Kamru Fort which is located at Kamru Village, built around 400 years ago by the King of Bushahr. There are about 900 stairs that leads to the main entrance of the temple. Kamru Fort is a five storey building, built in the style of Tibetan architecture. The shrine of Kamakhya Devi inside the fort campus, which was brought here many years ago from Assam, is the main focus of tourists visit along with a museum that showcases the arms and weapons used by the Kings during war. The Kamru Fort offers bird eye view of the whole region of Sangla Valley. From Kamru Village to the downward section of the fort there is Badrinath Temple and Ablokiteshwar Gompha (monastery).

Berinag Temple — From Sangla bazaar area to the downward side there is Berinag Temple. The Berinag temple is another prime attraction in Sangla valley, which is visited by large number of tourists and devotees every year, especially between the months of August and September. It is a very important place of worship for Hindus. The Berinag temple is dedicated to Lord Shiva.

Buddhists Monasteries — There are lots of Buddhist shrines and monasteries located around Sangla Valley as the place being close to Indo – Tibetan border.

Karcham — Karcham is the place where River Satadru and River Baspa confluence. From Karcham around 17 km to the right hand route met up at Sangla Valley. Karcham is nestled at an altitude of about 1899 meter. From Karcham upto Sangla a dam that produces 4.5 megawatt of electricity named ‘Baspa – 2 Hydroelectric Project has set up. From Sangla around 13 km is Karcham.

Rakcham — Between Sangla and Chitkul, the valley of Rakcham is also a paradise for nature lovers. Rakcham  is nestled at an altitude of 3050 meter (10000 ft) is a small village situated between Sangla (14km) and Chitkul (10km) on banks of river Baspa. Rakcham is abundant with orchards of apricots, peaches, chilgozas and apples. Enthusiasts can opt for spending one night at Rakcham or hiking through the mountains and forest, crossing glacial river, a sudden meadow and an enchanted forest, in some parts steep but yet beautiful. The village of Rakcham has many old wooden houses those were built in Indo – Tibetan style and well crafted wooden temple.

Chitkul — From Sangla around 20 km is Chitkul. Chitkul is nestled at an altitude of about 3450 meter (11300 ft) and is the last village of Himachal Pradesh lies on the border area of India and Tibet. At Chitkul there are around only 613 people residing here. At Chitkul there is a 500 years old Chitrelekha temple. Located on the border area of Tibet, Chitkul offers few trekking routes to Garhwal Himalayas. From Chitkul around 6 km is Mastarang Valley. From Chitkul around 30 km is Tibet border. Generally tourists visit Chitkul from Sangla, but staying accommodation is also available at Chitkul for a night halt. Due to heavy snowfall during winter the route to Chitkul remains closed.

Other Watchable — On the other side of Baspa River Bridge within few distance on the banks of Raktikhola there is a village, the local called it by the name ‘Azad Kashmir’. On this route tourists get to see small houses of stone and wood carvings. During the past many workers were brought here by the Indo – Tibetan Border Organization from Kashmir. But due to the mismatch of cultures and ideologies these people started their habitat on the other side of Baspa River and named this place ‘Azad Kashmir’. At the end of this village there is a ‘Trout breeding Farm’. This place is located within 3 km from Sangla.

Things to know
During heavy snowfall tourists are advised to avoid staying at Chitkul, as the route gets closed and car service also get stuck. It will better to visit Chitkul from Sangla on a day trip.
Tourists are advised to keep heavy winter cloths during winter season.
For landscape photographers, it will be better planning your trip during full moon. As the moonlight reflects on the valleys of the valleys of Sangla it gives back silver effect. Please make sure that tourists should not pluck apples or any other fruits from the trees.
Please note that the temperature during the day time varies with that of the night. After the sunset the temperature may drops below the minimum level.

How to reach — Sangla is located around 94 km from Sarahan, 100 km from Rampur and 235 km from Shimla. Buses are available from Shimla, the distance is about 232 km. From Shimla by bus it takes around 8 hours to reach Sangla. From Sarahan it is around 04 hours and from Rampur is around 03 hours. Sangla is around 51 km from Kalpa, time takes around 02 hours. Sangla can also be reached from Kalka. From Delhi to Kalka by train distance is about 303 km. From Delhi by flight tourists can reach Chandigarh. From Chandigarh around 17 km Is Kalka. Both from Kalka and Chandigarh as well Kinnaur can be reached.

Best time to visit — The best time to visit Sangla is September to March. September is the ideal time to see the golden apples bloom the valleys of Sangla. Though winters are very cold and snowfall is heavy. It is better to avoid the monsoon. 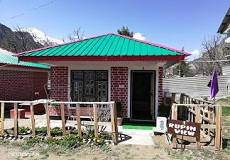 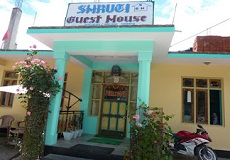 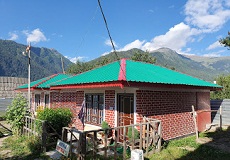 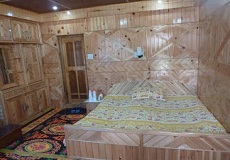 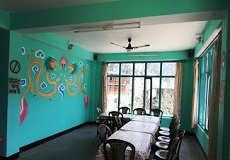 Tariffs:
Super Deluxe Rooms @ 1500/-
Deluxe Rooms @ 1200/-
Standard Rooms @ 1100/-
Family Suite @ 1600/-
Cottages @ 4000/-
Service charge @ 10% on the above room tariffs.
Please note that rooms tariffs may vary based on seasonal and non seasonal basis without prior information. To know the current tariffs and the best rates possible, please feel free to contact at the number furnished below. 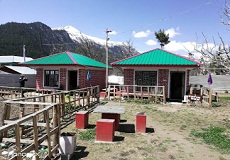 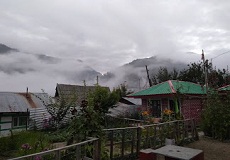 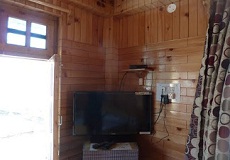 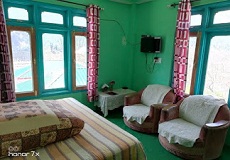 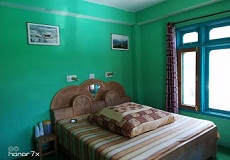