Mousuni Island is a small isolated island of the “Sunderban” delta located far away from the madding crowd of city life. Mousuni Island is claimed as one of the ‘Out of Track’ weekend gateways for one or two days from Kolkata. Mousuni Island is located at a distance of about 160 kilometer from Kolkata via Namkhana. Mousuni Island is an untouched virgin island lies at a sub division of Namkhana block. The name “Mousuni” derived from a Bengali word “Mosh Ani” means ‘Bringing Buffalo’. The name of Mousuni Island was first published in the journal “The Hindus” as “Bengal Sinking Island”. The actual beauty of Mousuni Island lies in the confluence of river and the sea. The island was found during the British era in India. The British used the island mainly for transportation of Salt and dried fish. When the British came to the island for inspection they noticed no one lives here, but lots of local people visit the place every day, on asking the locals claimed that they bring their buffalos here to feed. From there the name of the island derived Mousuni. As Mousuni Island forms a part of Sunderban delta, the lives of the people living here are very precarious as the island is hit hard by changing climatic conditions, unpredictable rainfall, rising sea level and coastal erosion are part of mainstream life. Due to development constraints the untouched or rather say virgin beauty of the island remains as it is. On the way to Bagdanga ferry Ghat gradually the scenic landscapes changes. On the narrow road of bricks, on one side huge farmlands of West Bengal State agriculture department and small canals of Fisheries development corporation’s and to the other side small log huts of the locals made of mud and the roof top is made of tin. Every house of the locals of Mousuni Island has their own animal husbandry and hatchery. On the way to Mousuni Island tourists often get to see the local fishermen drying their fishing nets in the sunlight or repairing their trawlers or the local women busy in weaving new fish nets, as fishing and agriculture are the two main source of livelihood of the locals of Mousuni Island. Very often tourists get to see numerous dry fish which are available in abundance in Mousuni Island. On the way to Mousuni Island the strong currents of Chinai River and the sparkling silver effect of the sunlight as it falls on the water will surely mesmerize your while crossing the river. Though the water of the Chinai River does not get dried up during winter. Once you get on the ferry to reach Mousuni Island the enjoyment and the adventure is endless. On reaching the Island one will notice that Mousuni Island is surrounded with full of dense greenery along with small log huts of the locals though very fewer in counting and agricultural farm lands those spread over huge landscapes. The locals of Mousuni Island live a peaceful life here. Being residents of city life, our ears are habituated with the enormous cacophony of hustle and bustle of city life, but during ones stay at Mousuni Island, your ears will get soothing effect by the symphony of birds and the sounds of waves at it hits the shore. As the sun sets at Mousuni Island, with the passage of time this tiny piece of hamlet get covered with thick layers darkness all over along with absolute silence. Only the sounds of small insects are audible. At Mousuni Island the first woke up call will be the alarming sounds of numerous birds those inhabit the island as the glistering sunshine falls on the beaches, it gives a sparking effect and will leave a soulful mark in your heart. In a complete package Mousuni Island is a paradise for nature lovers and bird watchers along with a haven for landscape photographers. But do not confined your trip to Mousuni Island within the boundaries of photo albums, or merely a discussion among your friends and colleagues, rather it is like a story that one becomes a part of it. Mousuni Island is story of pristine natural landscapes, boundless beaches, and village songs, the songs of birds and the admirable sunrise and sunset above the sea.

NOTE: This is for all the esteemed tourists those who like to visit Mousuni Island. As the island is bio diversity hot spot, it is earnestly requested to everyone that please do not litter unnecessary plastic bags, empty bottle or ant sort of hazardous material on the beach or in the sea or anywhere around the island. As it may hugely affect eco system of the island.

What to see: From Mousuni Island the nearest local watchable includes “Baliara” lies at a distance of about 3 kilometer to the north (here the accommodations in tents are available for tourists). Though the road condition to “Baliara” is a bit bumpy in the beginning but later one will get concrete roads. The locals also called it “SALT”. On the way to “Baliara” or “SALT” at Mousuni Island the scenic beauty of the landscapes comprises of agricultural fields of potatoes, chili and tomatoes these are mainly cultivated here at Mousuni Island. The route to “Baliara” is though the dense thickness of Pine and Juniper trees. As far as our naked eyes can see, “Baliara” is a long silent beach of Mousuni Island. During the sunset at “Baliara” along with the deep silence of the beach creates a different ambience at Mousuni Island. As Mousuni Island is a small paradise for birdwatchers, one can visit the nearest “Kakramarir Char” a small piece of land where numerous birds gather every day morning. The silence of the land continuously gets debarred by chirping sounds of numerous birds those visit here every day some of these includes White Billed Sea Eagle, Barn Shallow, Common Myna, Common Kingfisher, Long Billed Stork, Cormorant and many more.

How to reach: Mousuni Island can reach from Kolkata either by bus or by train with a journey of around 5 hours 30 minutes. From Esplaned bus terminus by bus or by train from Sealdah station upto Namkhana. From Namkhana by toto or by cycle van upto  Hatania Dotania river. Crossing the river either by boat or very recently an over bridge is constructed that leads to the other end of the river. From here Tata Magic are available those reaches at Durgapur ghat (a journey of around 45 minutes) via NH 117. From Durgapur Kheya Ghat one needs to cross Chinai River by small boat to the other end to reach Bagdanga Ghat of Mousuni Island. From here toto or Van will pick you up and take you to Baliara or Salt near the tents.

Best time to visit: Though Mousuni Island can be visited throughout the year. But is better to avoid the rainy season and the extreme summer. October to April is the best time to witness the Mother Nature along with varieties of birds those inhabit the island. 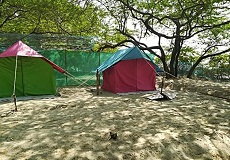 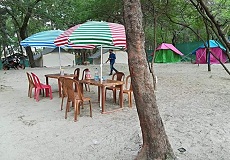 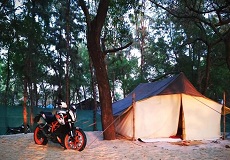 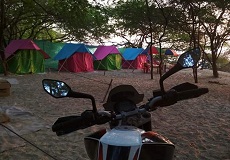 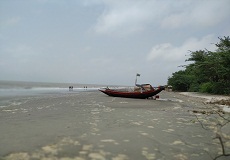 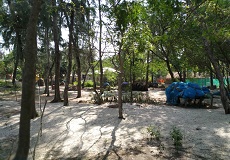 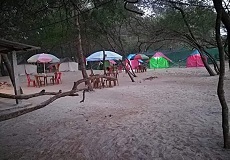 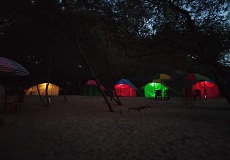 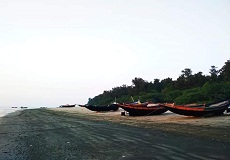 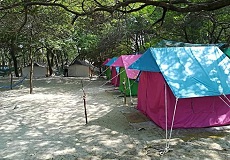 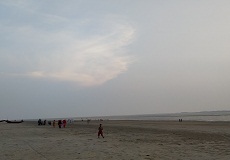 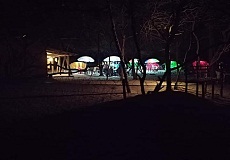