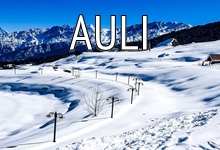 Auli is a small hill station situated in Chamoli district of the Garwhal region in the Indian state of Uttarakhand. Auli is regarded as a paradise on earth as it is dotted with numerous Oak, Pine and Deodar trees all over. This small region of Auli is nestled atop a big land mass called bugial which means ‘a meadow’. Auli covers an elevation from 2519 meters to 3050 meters above sea level (9200 ft) and it lies at the end of Nanda Devi National Park. Auli is guarded by Himalayan ranges of both Kumaon and Garwhal region. Auli is blessed with invigorating views of the splendid mountain ranges of Nanda Devi, Duna Giri, Nanda Kot, Hati, Ghori, Nar, Camet, Kakbhusandi and many other Himalayan ranges. During June to October Auli grows the highest number of flower species found anywhere in the world along with 520 plant species of higher altitude among which 498 are floral plants species. Auli is also home to some of the popularly known ‘Bugyal Lands’ also known as ‘open meadows’ scattered throughout the region and it is also the gateway to some of the popular mild and short trek routes. The past history of Auli dates back to around 08th century when Guru Adi Shankaracharya visited the place. Auli is an ideal escape for honeymoon goers, adventure lovers, peace loving tourists and above for those who are interested in extreme winter sports. The wonderful dawn breaking behind Nanda Devi is an enchanting sight.

Skiing At Auli: Skiing at Auli is popular among tourists and adventure lovers throughout the globe. In 1984 a skiing centre was developed at Auli. During winters the valleys of Auli get covered with thick layers of snow, at that time adventure lovers travel not only from all over India but other parts of the globe as well to enjoy the skiing sports within the natural landscapes. Every year Auli hosts the National Skiing Championship between the months of January to March. Skiing at Auli is mainly conducted and trained by experienced professionals. For learning skiing there are different courses offered by GMVNL in which one can enroll for a one or two week paid course. Auli is often compared with the best ski resorts of the world and has also hosted the first S.A.F Winter Games in the year 2011. The slopes of Auli provide thrills to professional skiers and novices alike.

Places to visit in Auli:

Auli Ropeway: Auli has a significant attraction in terms of tourism for it is regarded as a famous skiing destination for adventure lovers and it is also home to Asia’s largest cable car ride that covers a distance of 4 km in length. The cable car at Auli is a 10 tower cable car that extends from Joshimath to Auli. This is also claimed to be the second largest in the world and it offers a panoramic view of the whole region of Joshimath and Auli. This cable car remains open from 08.00 am to 06.50 pm. This cable car ride is located at an altitude of about 3010 meter above sea level.

Auli Artificial Lake: Auli is home to one of the world’s highest altitude artificial lakes perched at an astounding elevation. This artificial lake at Auli was developed by the Uttaranchal government in view of creating artificial snow on the new ski slopes during the time of lesser snow fall. The artificial lake of Auli is located around 01 km from the GMVN tourist rest house and is situated beside the Cliff Top Club. The water from the lake is strategically used to feed the snow guns stationed along the ski slopes at Auli. The periphery of the artificial lake at Auli also offers stunning views of the Nanda Devi mountain range. During winters the lake gets covered with snow.

Gurso Bugyal: Gurso Bugyal also known as Gurso meadow is a trekking trail located around 3 km from Auli. Gurso Bugyal is nestled at an elevation of 3065 meter. The route from Auli to Gurso Bugyal passes through dense forests of Golden Oak trees. For tourists those who are habituated in short treks for them Auli – Gurso trek is an ideal one. Gurso Bugyal is a large and widely spread grassy land of green pastures coated with lush green undulated meadows and dotted with wild flowering plants. Though these flowering plants bloom with colourful flowers during autumn. During winter Gurso Bugyal gets blanketed with thick layers of snow. The trek to Gurso Bugyal can be started either from GMVN Rest House or the Auli rope-way tower no 10. For trekking to Gurso Bugyal trekkers will find guides that can lead the way for the trek. Trekkers can opt for a night camping at Gurso Bugyal.

Joshimath: Joshimath is located on the Rishikesh – Badrinath highway and nestled at an altitude of about 6150 ft (1875 meter) and is located around 13 km from Auli. The route to Auli from Joshimath is guarded with the shades of Oak and Birch trees. The cable car ride from Joshimath to Auli is one of the popular activities among tourists visiting Garwhal region of Uttarakhand. Joshimath forms the gateway to the famous Badrinath trek. Apart from this Joshimath also forms the gateway to many other trekking options around Uttarakhand. Joshimath is also the home to many temples that are worth visiting.

Chenab Lake: Chenab Lake is an artificial lake that serves as a reservoir for the people of Auli. Though this crystalline lake is still unexplored to many but is also one of the authentic trekking trails from Auli. The water of Chenab Lake is still in its purest form as being untouched and lies within complete isolation from the crowd. The route to Chenab Lake abounds in rocky passes and natural greenness of Oak and Deodar trees all over. The lake is guarded by Himalayan ranges of the Garwhal region.

Auli Chair Lift: Auli Chair Lift also acts as a connector between Auli and the Skiing slopes of Auli Near the artificial lake. Though there are no fixed timings for the Auli Chair Lift but it runs every minute during its operational hours. The Auli Chair Lift is a high speed detachable chairlift and spreads over a length of 800 meter. The Chair Lift can carry a maximum four persons at a time.

How to reach – Getting There:

By Road: Auli is well connected by strong motor-able road links with major tourist’s destinations of Uttarakhand. Government buses ply from different places of the state that connect with Auli. But tourists should not only depend on buses for their tour, instead hired cars are also available that connect Auli with other destinations of Uttarakhand.

Note: Direct car services are available from Rishikesh bus stand buses for Joshimath and Auli. But during winter season vehicles on the route from Joshimath to Auli become non operational due to heavy snowfall which in turns blocks the road, during that time the only way of transport is either by trekking or by cable car route. The last cable car ride from Joshimath to Auli leaves at 4.20 pm during winters and 5.30 pm during summers.

Best time of visit: Though summer is the best and ideal time to visit Auli to escape the scorching heat of the plains. Winters are quite chilly and the hamlet remains mostly covered with thick layers of snow. However, skiing in January and February is the best time. Monsoon is tricky and is advised to be avoided due to probability of landslides.