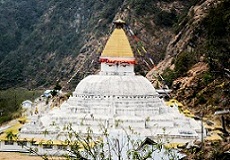 Zemithang is a hidden paradise in the state of Arunachal Pradesh, India. In a full moon, the view of the golden cultivable lands along with wide open valleys and high rise mountains from Zemithang is remarkably eye catching. Zemithang is located within 90 kilometers from Tawang at an altitude of about 8000 feet (2484 meters). From Tawang state transport buses are available those reaches Zemithang. The route to Zemithang is through the crisscrossed bridle path of Arunachal Pradesh. While travelling to Zemithang from Tawang one can halt at Luma, which is at 45 kilometers away from Tawang. Luma is a settlement with numerous shops and markets. From Luma bus stop within a distance of half kilometer there is small idol of Lord Buddha named Dujen Lumpa and it is worth watching. It was established on the hill top. From this point a breath taking view Luma is visible. From Luma on the way to Zemithang, the road has en route gradually through the dense thickness of bamboo and pine trees. On this route at some place sunlight enters through the leaves of the dense greenery. As one come across the forest area, they will greeted by a waterfalls. The water reflects a silver colour shine as direct sunlight falls on the water. This waterfall has originated from Namjang Jung Chu River whose origin is from Tibet it flows and intersects with Kameng River. From there within a few distances is the entry point of Zemithang. As one steps into Zemithang village, they will be greeted by Gorsam Chorten Monastery. Literary Zemithang is known by presence Gorsam. Gorsam Chorten is the second largest monastery of Asia and the premises of this monastery are spread across a large area. The locals claim that Gorsam Chorten dates back to almost 7 centuries old. Gorsam Chorten was built by a lama named Sangey Pradhar, a Monpa monk. It was built as replica of Bouddhanath of Nepal. The artistic side of the monastery is very delicate. Zemithang is guarded by numerous mountains those are visible from a far horizon, you will get know in details as you get inside the village. Zemithang is a place of absolute silence. The Zemithang means ‘Zemi – Sand’ and ‘Thang – Plain Land’. Literary Zemithang is land which was washed away by river, it other words Zemithang is also known by the name Pangchen. In Mongpa language the word ‘Panchen means a person, who is free from all the sins’. Almost all the villagers of this hamlet work for the conservation of wild life, forest and environment. At Zemithang the locals usually do not harm animals. As the sun rises at Zemithang, the silence of this hamlet gets debarred by chirping sounds of numerous Himalayan birds those inhabit the place. Few of those may include Monal, Trogopan, Hill Patich, Snow Patich, Blood Phesant, Black Necked Crane, and Blood Pigeon. Not only confined to birds species, Zemithang is also home to some of the rarest species of wild animals like Red Panda, Blue Ship, Mock Deer and many more. The beauty of Zemithang mainly comprises with birds, animals, high rise mountains and waterfalls. From Zemithang one can visit Lumpo village which is at a distance of 17 kilometers, an uphill route and from there another 7 km is Muchat village. At Muchet there is a small Buddhists monastery, surrounded with multi coloured prayer flags. At Muchet one will get to know more about the history of Zemithang. The whole area is under the supervision of Community based Eco Tourism. On the way back to Zemithang from Muchet village, one will get to see the Gorichen Peak. As the sun sets in the west the hamlet of Zemithang goes under the lap of darkness and the stars seems to come down on earth. The village is unique in itself – houses of stone rising from the slopes, with piles of firewood stocked in quaint little basements and attics, it seems a postcard from the Western world rather than a place near the Sino-Indian border. As Zemithang has very little impact of urbanization in the village, it provides immense potential to experience the traditional life style and culture of Monpa indigenous tribal community.

Nearest Places to Visit: From Zemithang on the way back to Guwahati, from Dirang within a distance of 11 km there is an old bridge made of Iron. From there within a distance of another 14 km is an isolated village named Thembang. An ideal place for trekkers and photographers. Through the locals of this village are economically backward. At Thembang there is a small monastery; inside it is an idol of Guru Padmasambhav.

Best time to visit: Zemithang can be visited throughout the year, but it is recommended to avoid the rainy season, due to chances of landslides. 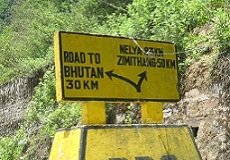 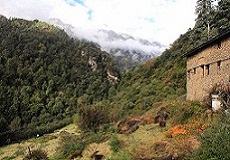